SAM Films was founded in 2012 by Roger Stevens and Chris McLoughlin.

Roger has worked for over 25 years in virtually every genre of broadcast television, for broadcasters such as the BBC, SKY, ITV, MWO and Channel 4. Credits include “Cash In The Attic”, “CBBC”, “Mirror Signal Manoeuvre”, “Grandstand”, and “London Uncovered”. Roger works  for SAM Films as an editor, vision mixer, writer & director. SAM Films work has taken Roger to both China and Indonesia, with further trips planned for 2015.

In 2014 Roger wrote & directed our TV pilot, “The Majestic” and leads the company’s development of programme formats on offer to broadcasters. 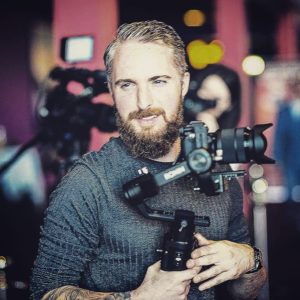 Chris trained in film production at the University of Central Lancashire, graduating in 2012. His final work at UCLAN was the writing and direction of the highly praised short film “The Sound of Madness”. Chris has worked freelance on many projects, and TV work for SAM Films includes the “2012 World Poker Tour” and “Mr World 2012 – 2017 ” and “Miss World 2013 – 2018”.

Other projects include working as producer on SAMfilms TV pilot, “The Majestic”.

SAM Films is a creative media production company and we are proud to be based in Lancashire, but we travel not just in the UK, but wherever we are needed. Overseas filming has included China, Bali, Turkey, Spain, Monte Carlo, New York and Boston. The company works in various sectors of film-making and we use the latest 4k technology. We follow developing trends in broadcast technology and ensure that our clients have access to the best equipment available.

Everything we film is in full HD or 4k, although you can take delivery in whatever format you need. We can deliver on Blu-ray, DVD, tape, or in a file format of choice. We use broadcast-quality sound and video equipment and all our editing is on AVID systems and/or Adobe Premiere suites, with GFX works and animation conducted in Adobe After Effects. We can be as complex or simple as you want us to be, and for corporate and promotional projects we offer a bespoke script writing service that can take you through from concept to completion.